Conductor/Composer Anthony J. Maglione is a graduate of Westminster Choir College of Rider University, East Carolina University, and the University of California, Los Angeles. He is the Director of Choral Studies at William Jewell College in Liberty, MO where, under his direction, the Concert Choir was Runner Up (2nd Place) for the American Prize in Choral Performance, College/University Division. In addition to his responsibilities at William Jewell College, he serves as Director of the Greater Kansas City AGO Schola Cantorum, Conductor Emeritus of the Freelance Ensemble Artists of NJ, a symphony orchestra based in Central NJ and serves as Artist-in-Residence and Choirmaster at St. Mary’s Episcopal Church in Kansas City, MO.

An active composer, Anthony’s choral works are growing in popularity and are published on GIA’s “Evoking Sound” choral series. In the last several years his music has appeared at state and national-level conventions, on TV, in video games, and has been recorded on Albany Records, Gothic Records and Centaur Records. In 2014 and 2015, Anthony was honored as a Semi-Finalist and Finalist (respectively) for the American Prize in Composition, Professional Choral Division and was recently awarded the 2016-2017 William Jewell College Spencer Family Sabbatical Fellowship, a year-long fully funded sabbatical in order to compose his Concerto for Two Trumpets and a cantata for choir, soloists, chamber orchestra and organ commissioned by the American Guild of Organists to premiere at the Biennial AGO National Convention to be held in Kansas City in 2018.

Anthony’s recent album, The Trumpet Sounds, released on January 6, 2017 and features his thirty-minute cantata, The Mystic Trumpeter, composed for choir, soloists, organ, brass, percussion and renowned trumpet soloist, Randolph Lee. Many of his works are available to stream or download on iTunes, Spotify, Naxos, YouTube or Soundcloud.

When not conducting, composing or teaching, Anthony regularly performs as a tenor in solo and professional choral engagements. He is currently a member of The Same Stream, a professional choir conducted by James Jordan of Westminster Choir College. Anthony resides in Kansas City, MO with his wife Dorothy Glick Maglione. 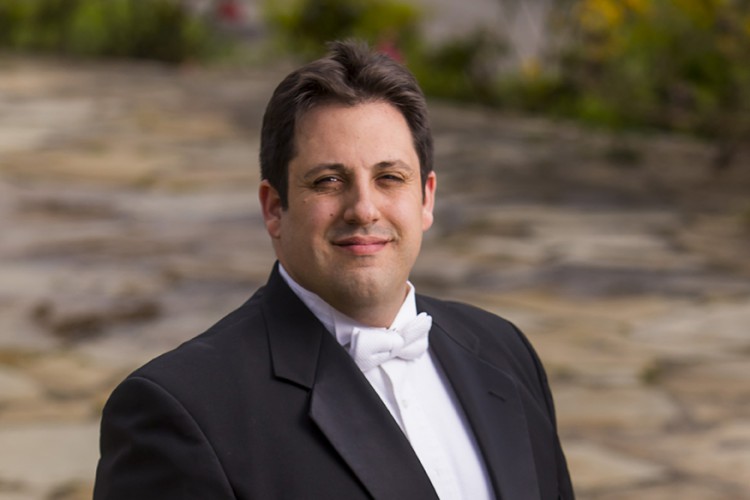