Benjamin Cornelius-Bates, MM, AD, FAGO, grew up in Alaska, but did not study the organ until he attended the University of Montana, Missoula in 2001. There he studied with Dr. Nancy Cooper and earned a BM in Organ Performance. After moving to Vancouver, British Columbia with his wife, Benjamin studied organ with Rachel Alflatt and composition with her husband Denis Bédard. Benjamin earned his MM in Sacred Music from Duquesne University in 2009 and an Artist’s Diploma in 2011 studying with Dr. Ann Labounsky, emphasizing improvisation. He is organist and Director of Music Ministries at St. Paul of the Cross Monastery in Pittsburgh, PA. Currently, Benjamin is pursuing a Doctorate in Music Composition at West Virginia University, studying with Dr. Joseph Dangerfield and Dr. Matthew Heap, where he is also an Adjunct Professor of Music Theory and Composition.

As a composer, Benjamin, has had his compositions played throughout the world, including the United States, Canada, France, England, Italy, Netherlands, and Germany. His piece, Fête, was a finalist in the 2012 Kansas City AGO Composition Competition. The First Readings Project in Minneapolis, Minnesota premiered the choral work, Ave Maris Stella, in May 2015. Benjamin was commissioned by Carson Cooman to write the work, Fantasia primi toni, for organ in the Fall of 2014. Mr. Cooman has also recorded a number Benjamin’s works and can be heard on his Youtube channel.

Benjamin has lectured and served on panels regarding Liturgy and Sacred Music. He served as a panelist on Sacred Music at the 2015 National Pastoral Musicians Convention held in Grand Rapids Michigan. The panel was featured on the Pray Tell blog. He has lectured on the use of rhetoric in Baroque music as well as the performance issues surrounding temperament in early music. 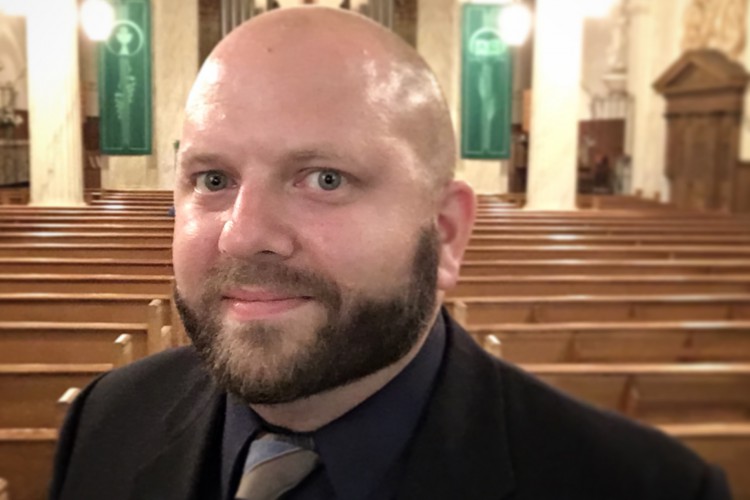