Emma Lou Diemer was born in Kansas City, Missouri on November 24, 1927. Her family moved to Warrensburg, Missouri when her father, George W. Diemer, became president of what is now the University of Central Missouri. Her mother, Myrtle Casebolt Diemer, was active as a church worker (DCE) in Methodist and Disciples of Christ churches in Kansas City and Warrensburg. Her maternal grandmother, Lizzie Murphy Casebolt, lived with the Diemers from the time Emma Lou was born. Lizzie had been organist in the small Missouri towns where she lived in her early years. Emma Lou’s three siblings were all musicians and teachers.

Emma Lou’s degrees in composition are from Yale University (BM, MM) and the Eastman School of Music. She is professor emeritus at the University of California, Santa Barbara, where she was on the composition faculty from 1971 to 1991. She is organist emerita of First Presbyterian Church in Santa Barbara. Before moving to Santa Barbara she was organist at Lutheran Church of the Reformation in Washington, DC, and before that in churches in Warrensburg; Kansas City; Rochester, NY; and Arlington, VA.

Her music has been published since 1957, and includes works ranging from symphonies and concertos to hymns and songs and many choral works. Works that are recorded include her piano concerto, organ concerto, marimba concerto, shorter symphonic pieces, as well as compositions for chamber groups, solo piano, and voice. Awards have come from ASCAP, the NEA, the Ford Foundation, the AGO (1995 Composer of the Year), and others. She has played recitals of her own music at Grace Cathedral, Washington National Cathedral, Our Lady of the Angels in Los Angeles, and others. Her organ music, published primarily by Augsburg Fortress, Zimbel Press, and the Lorenz Corporation, comprises over twenty collections and a number of extended solo works. She has made an effort to write for different levels of performer from near-beginner to advanced, and to make her music accessible at least most of the time. 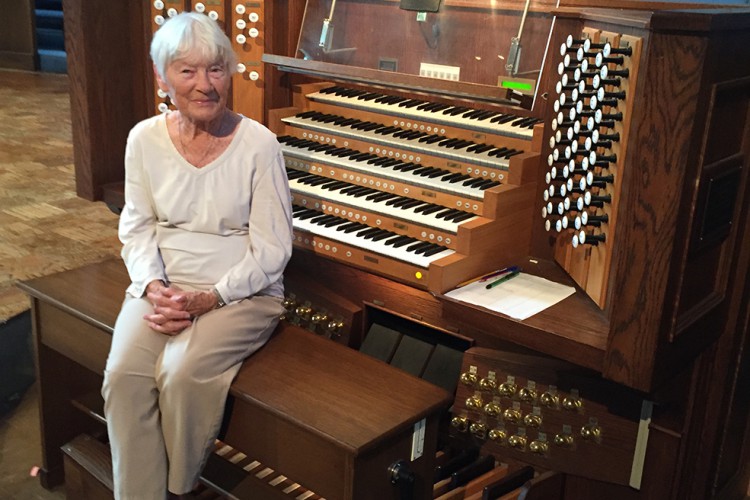